Growing up, Liza Lehmann was part of a well-connected family, due in large part to her father Rudolph’s fame as a celebrated artist. Rudolph (Rudolf) Lehmann was born in Germany but became a naturalized British citizen in 1866, shortly after Liza’s birth. Rudolph created a series of portraits that features autographs by each portrait’s subject, which is now in the collection of the British Museum (visit our Bibliography page to view those pieces!). These portraits featured notables such as Giacomo Meyerbeer (opera composer), Baron de Reuter (founder of the Reuter News Agency), Frédéric Chopin (composer), Robert and Elizabeth Barrett Browning (playwright and poets), and Clara Schumann (composer and pianist).

Liza’s mother Amelia Lehmann (née Chambers) was no stranger to fame either – her father was a Scottish author and naturalist whose work Vestiges of Creation preceded Charles Darwin’s work on the theory of evolution. (As it happened, Darwin was counted among one of the many famous friends of the Lehmann family). Amelia’s father apparently declared that she was so talented that she did not need any musical instruction; thus, Amelia did not have any formal training until after her marriage. According to Liza in her memoir, “[Amelia] had a wonderful ear, the gift known as ‘absolute pitch,’ and could transpose easily at sight. She wrote some beautiful music, notably an operatic setting of a Goethe libretto; but the same diffidence and exaggerated, almost morbid self-criticism, led her to destroy most of her compositions, including with them many of her best.”1 Lehmann also writes that her mother called herself the “Brutal Truth Department,” a reflection on her method of dispensing criticism to her students (and daughter).

But however much Amelia disdained her own talents, she was determined that Liza would succeed as a performer and so the young Liza was frequently called upon to sing for friends and family that came to call on the house. Liza tells of one such occasion in her memoir when the pianist Rubinstein was entertaining at their house and charged Liza with singing for the guests. Liza had only just begun to study voice seriously and couldn’t face singing for the well-to-do of the London arts scene; she staunchly refused at her mother’s bidding. However, her father, fearing that she was going the same route of her mother (that is, pursuing music only in study, not practice) threatened to go to bed unless she sang! Suffice it to say, Rudolph had an early bedtime that evening.

Lehmann’s marriage, followed by an unfortunate illness that damaged her voice, marked the end of her performing career and she turned to composition. Her husband, Herbert Bedford, was also a talented composer, author, artist and inventor. Together they had two sons: Rudolf and Leslie, both of whom showed promise in music and art. The family would often create and sing little rounds together during their leisure time and Lehmann’s memoir reproduces very fine portraits that each son did of the other. Unfortunately, Rudolf died at the early age of 18 while training for service in World War I, which had a profound effect on his mother. It might even be said that Liza never fully recovered from his death; she died just a few years later at the early age of 56.

However, Liza and Herbert’s legacy persists even today. Their younger son Leslie Bedford, went on to make significant contributions in the field of engineering. Bedford’s developments in radar were crucial to the Royal Air Force during World War II and he was ultimately awarded an OBE and a CBE. Leslie married Lesley Duff, a soprano who was friends with composer Benjamin Britten and actually performed in several premieres of his operas while with the English Opera Group in the 1940s. Their three children, Peter, David, and Steuart were all musical. Peter Lehmann Bedford was a singer at Glyndebourne Opera, while David Vickerman Bedford was an influential musician, music educator, conductor, and composer whose work ranged from pieces for children’s choirs, orchestral works, pop music, and progressive rock. Steuart John Rudolf Bedford (OBE) is a conductor who is known for his work with Britten operas and has worked with such illustrious establishments as Glyndebourne, the Metropolitan Opera, The Welsh National Opera, and English Sinfonia.

It’s somewhat bittersweet that Liza Lehmann did not live to see her family’s contributions to the world, but I think she would have been pleased to see that her legacy is very much alive today. 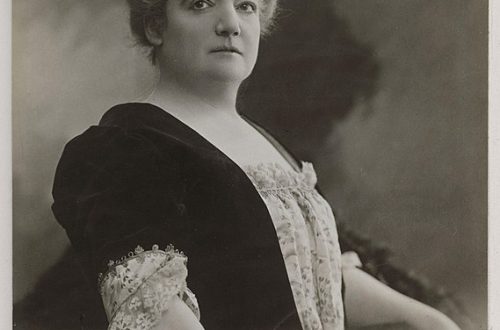 “From Tsars to Stars”